Q.    What it feels to have your first one with your first nomination right now with you?
A.    Feels… I’m not going to say surreal.  I did not expect it.  But it’s the end ‑‑ it’s a bit of the end of a journey with this film that I mean, the script that came across my desk four years ago.  And also, my wife and I were talking about it this morning when we woke up, not knowing what would happen tonight, saying, hey, whatever happens tonight, four years ago, I decided to go to work doing four films a year.  That was easy for me to do.  She came with the kids, followed me everywhere, and we went, and it was harder for her than it was for me.

And so, this being Dallas Buyer Club, when we did the film, it was also on my desk five years ago, that we finally got made two years ago, it sort of feels like a bit of a culmination.  Not really a destination as far as work goes, but the movie, the script, no one wanted to make it for 20 years.  It got turned down 137 times.  And then it came across my desk, I jumped on with the team that was trying to get it made and we somehow got it made and got it across the line.  That was a minor miracle in itself, so that felt great.

And then I saw the first cut Jean‑Marc sent me to look at, and I was like, oh, I think we may have gotten it on camera.  I think we have a good film here.  Edited it together.  I liked it.  So you never know what’s going to happen after that.  All of a sudden it premieres in Toronto.  It’s received well.  It sticks with people in a way, they pass that word along.  Then we open up in a few theaters here in America and it started to gain momentum.  Started to really stick with people.

And now, the ultimate light, the gold standard of the light of excellence is shined on it, not just in my performance, but we had a couple of other things tonight.  We had six nominations.  Jared won, the makeup and hair won with a $250 budget.  Oh, they were stealing charcoal and stuff to do our makeup.  That’s extra rewarding for me because I was a part of that team that was pushing this thing, trying to push the thing over the hill that nobody wanted to make.

And I’m standing here now.  It’s something that I got to ‑‑ I got a prize for excellence for the work I do in something that’s not my job, it’s not my hobby and it’s not my fad; it’s my career.  That feels wonderful.  And I didn’t say it to my ‑‑ it’s a very special thing that happened.  1992 I was one week into working on my first job, Dazed and Confused, my father moved on six days into working on my job.  Now in hindsight I’ve looked back, he got to be alive for me doing the one thing that was not my fad, hobby or job, we didn’t know it then, but it turned out to be my career, and that’s why I was actually ‑‑ he came to my mind tonight in speaking about him.  It feels wonderful.  Yeah.  It feels wonderful. 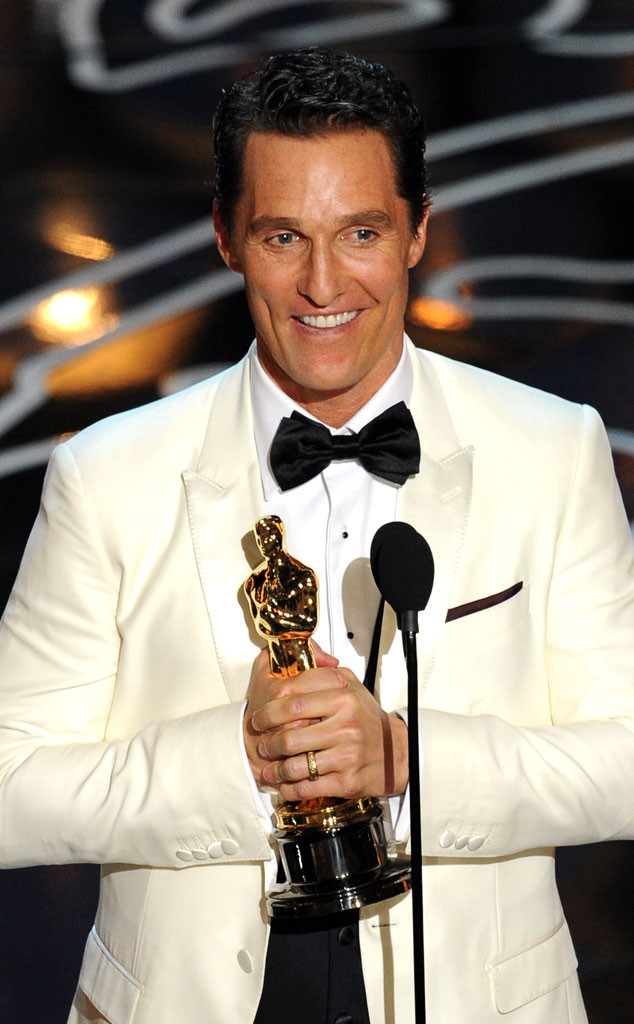 I got to be honest with you, I’ve been more process oriented than I ever have been.  I’ve been more like F‑it, go for the experience, Matthew.  What’s the personal experience I can get out of this as an actor?  And lovemaking, the daily construction and architecture, the making of a movie, and when it’s over, be fulfilled in the making of that movie.  And what if it rises to somewhere, if it goes straight to DVD, forget it.  That was about making the movie.  It was a process, you worked with people and went to work and put your head down and did it.  Now, the results came in more than ever by just putting my head down and sticking to the process.

You know, I worked with single‑minded directors.  They were all characters that were sort of fringe, on the outside ‑‑ sort of outcast characters, characters that didn’t make up ‑‑ that made up their own rules, you know, that didn’t placate opinion to anybody else.  For Wall Street, I got to go work with Martin [Scorsese], worked with Leonardo in that scene ‑‑ in a scene for a day.

True Detective, great writing.  I read two episodes and I’m like, I’m doing this if you’ll give me the role of Rusten Cohle, I’m in.  And we went and made that.  That was basically like a six‑month film.  It was one director, eight episodes, 450 pages, basically a 450‑page script.  Six months’ shooting on film.  Very considerate.  Much more considerate than Dallas Buyers Club.  We shot that with one camera, no lights, and a tiny crew in 25 days.  I was going for the quality and the experience.  And what’s my experience going to be?  I don’t know what this means, I don’t know what the result will be.  What can I get an experience out of, Matthew?  That’s the question I was asking myself.

Q.    Congratulations.  What’s the status?  Are you going to go back for True Detective season two?  Have you thought about continuing on with the show?
A.    No, no.  We won’t be back for season two.  Season one was finite.  Eight episodes, that’s the EOC.  I think there’s an episode probably airing right now.

Q.    This time in your life when your children talk to you about it and how it’s been and the road and they’re excited about it, what do you want them to take away from it?  What would you share with them about it?
A.    Well, here’s what we share with them because they understand that Papai goes to work, plays make believe, they understand there’s a difference between reality and movies.  They also understand that Papai can be in more than one place at one time, meaning I’m there in the kitchen and then all of a sudden I’m on the screen, that was a big shock when they first saw that as kids. (…)

So, what we’re trying to give is a general lesson is if you do your best right now, it can have reciprocity later; it can come back and pay residuals for whatever they end up doing in life.  But if you do it right now, later on you can be rewarded for good work done now.  That’s the lesson we’re trying to translate.